Even though I live in California, I still dream of warm cozy clothes in the winter. This winter I had been fantasizing about a funky sweatshirt dress that had some element of style that would make it special. I was thinking kangaroo pocket, I was thinking cowl neck. And I didn’t know it yet, but I was thinking Jasper.

I had pinned Paprika Patterns‘ Jasper hoodie before it was a pattern for sale. So imagine my delight when I found that not only had the hoodie been made into a pattern for public consumption, but that the pattern also included a dress and/or cowl option.

In other news, I don’t know what’s with my camera. My photos were just poor quality this shoot 😦

Shortly after I bought the pattern for my Jasper dress, I saw Gillian’s blue version.  Wise woman that she is, Gillian advised me to cut a size smaller than I thought I needed because the pattern runs large. But I laughed in the face of wisdom! Then promptly spent the remainder of my time sizing down the pattern…. Ooops! In the end I took about an inch out of the back seams and all the way down the arms. I also brought the front seams in under the bust, but left them as-is at the actual bust and around the hips.

Extra fabric where I didn’t need it, and none where I did! Despite the pattern’s clear statement that this dress was intended for a 5’7″ frame, my 5’10” self cut the pattern straight out of the package without adding any additional length. I guess I’m not wearing this one to work!

Some other pattern instuction that should definitely be heeded, is fabric selection. This pattern requires true heavy sweatshirt fabric to hold up the structure in the neck (or hood), and there are great suggestions on the Paprika Patterns blog to help you find the right stuff. I found mine on Fabric.com and, again, decided to ignore the wisdom of those who came before me that informed me the fabric was lighter in person than it appeared online. That’s ok, I still like it.

I would also advise others to heed the pattern suggestion to use a lighter weight cotton jersey (instead of fleece) for the inner lining of the kangaroo pocket. Even with the lightweight lining, you can still see the lines a little on my dress.

Speaking of which, this pattern also marked a delightful first for me – my first welt pocket! I experienced a decided lack of vision with this part of the pattern and just couldn’t quite imagine how it would come together, even after looking at the instructional photos. But, I trusted in the instructions and, perhaps fool-heartedly, cut my pattern without first doing a practice run, and… it worked! My only ‘whoopsie’ was my use of a non-washable marker to mark my fabric pieces without realizing the marks would be visible in the final product. Meh, they’re just specks! 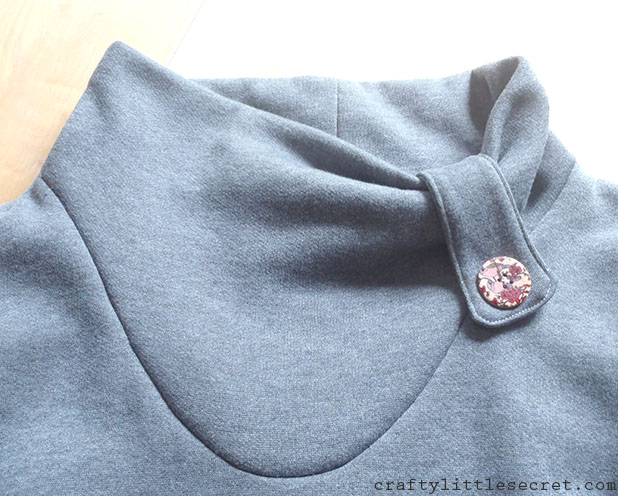 The one part of construction that I struggled with a little was top stitching the epaulet. I just found it difficult to sew through the thick layers of sweatshirt without distorting the shape of it. That’s ok, the adorable vintage wooden button I found in Portland a couple years ago will distract the eye from any imperfections! (I knew I was right to hoard random buttons…)

I finished up my dress in a weekend or so and concocted a plan as to what would be the perfect debut for Jasper…..a local sewing meetup at Britex Fabrics! Or, erm, what would have been the perfect debut if I hadn’t written down the wrong time and showed up just as the meetup was ending! Noooooo! But don’t cry for me Argentina, because I showed up at the meetup just in time to still get my 20% off coupon for Britex….which I promptly spent on some gorgeously soft black bamboo rayon (classic wrap dress, here I come!). Suggestions for the perfect wrap dress sewing pattern are welcome….