It was touch-and-go for a while there, but I actually managed to finish all my holiday projects in time for Christmas! The main focus of my attention this year was my niece/nephew, scheduled for arrival in early February. The lucky little guy or gal will the be recipient of the first sweater I’ve ever completed! Turns out they’re much easier to finish when they’re miniature… 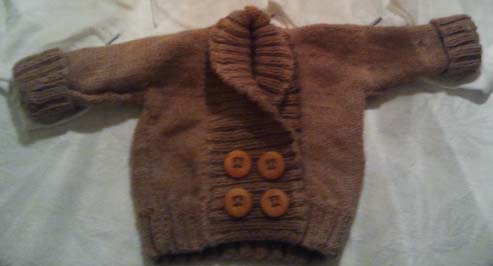 I’m so proud of how it turned out! I used the Debbie Bliss Baby Reefer Jacket pattern with a couple changes. I thought it would be easier for both me and the parents to forgo actually button closures on the front in favor of decorative buttons sewn to the front with hidden snap closures on the underside.

Also, I’m not big on counting rows when I knit. I kinda just knit until it looks “long enough”. This cause a problem for me when it came time to add the ribbing that forms the double breasted front of the sweater. The pattern called for me to cast on “x” number of stitches to start the ribbing, but I hadn’t followed the instructions for the length of the stockinette portion. Instead, I just picked up the stitches and knit the ribbing right onto the sweater. This resulted in a slightly different neckline on the sweater, but I think it’s still pretty cute!

Expert knitters may also want to avert their eyes from the mess that is the underarm seam. The seams up the side of the sweater turned out really well but it got awkward once I had to start stitching the arms. It looked like I should do Kitchener stitch, but I only know how to do that off needles (a nice video tutorial, here). So I just sewed it.

I also sewed up a few of my signature hand sewn felt aplique onesies, keep your eyes out for a tutorial soon (sorry for the poor quality of the images, I took them on my phone)!

Finally, I wanted to make a little something for my boyfriend’s family for Christmas this year so I made some spiced candied nuts and knit up a couple Christmas birdie ornaments.

I’m not sure where the nut recipe is from originally, but it’s similar to this one from Martha Stewart. I just left out the egg, allspice and chili powder. Instead of baking them, I tossed them around in a pan with the sugar stirring constantly until they browned (about 15 min), then tossed them with the salt, spices and an extra tablespoon of sugar. Warning, these are like crack. 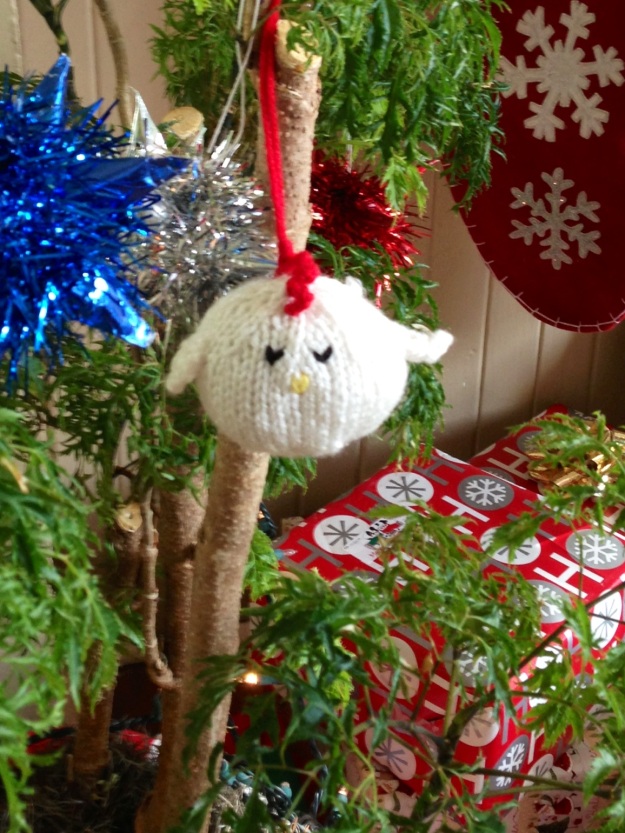 The birdie ornament is a free pattern download from Ravelry that I posted about earlier. I made two versions of this ornament, one following the pattern and one chicken instead of robin. I actually think the chicken turned out much cuter (and easier, as it didn’t involve any color change)! For the comb I just crocheted a single chain about an inch and a half long then stitched it on scrunched up like an inch worm. Easy peasy!