My adorable little nephew had his first birthday this weekend and while I didn’t get his present mailed in time, I at least finished it in time for his birthday!

I really wanted to make him a little hoodie so I chose the free Paton’s Hooded Cardigan pattern in size 12-18 mo. (fingers crossed that it fits him!). Clearly, however,  this sweater does not have a hood. I ran out of yarn. 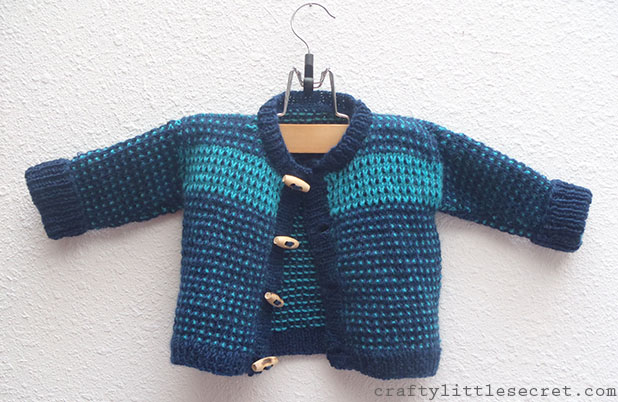 I was commissioned to make a sweater for my nephew by a friend of my brother’s who brought some amazing lamb’s wool back from Australia, so I only had a finite amount of yarn. It was hard to guess how much I’d need since I was altering the suggested color blocking and I think I made the arms too long. Oh well, it’s still pretty darn cute without the hood too. 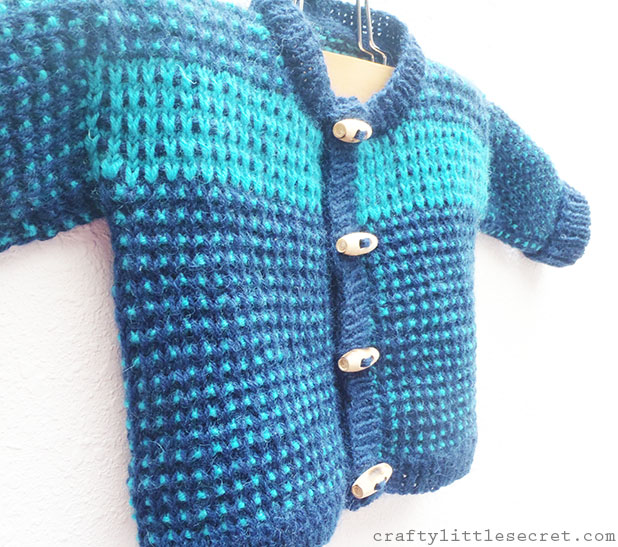 I carried the stripe along the chest and back but didn’t include it in the sleeves. I’d never knit this pattern before (and this is only my second sweater) so I wasn’t totally sure about the construction and how it would all come together. I figured if I did the stripe on the sleeves and it didn’t match up it would make the whole sweater look wonky so it was better to just leave it off.

I used Moda Vera Pure Wool 8 ply, the blue is colorway 47 and the teal is colorway 37. Do you think I would keep track of how much yarn I actually did use in case someone wanted to replicate this? No, of course not. I definitely don’t knit as much as I sew so remembering what details I should be tracking is a bit of a learning experience for me.

The collar was relatively easy to add, which was nice because I’d never made an alteration like that to a knitting pattern before (wipes brow with sigh of relief). I just followed the pattern and cast off the neckline as detailed in the pattern. Instead of adding a hood though, I counted the number of stitches around the neckline (I think I had 62), then I made a K1, P1 [repeat] rib that was 6 rows long and sewed it on.

In addition to the collar alteration, another first for me with this project was blocking! I wrapped a bulletin board in a towel to use as my base then spritzed the sweater with a bit of cool water and pinned it in place on the board. I probably should have blocked each piece individually before assembling the sweater, but I didn’t think of it then. So instead I blocked in two stages; the body of the sweater first, then the arms in a second step. The blocking definitely helped keep the collar from folding over and corrected some wonkiness along the button placket.

[ASIDE: All this knitting talk reminds me – you can find me on Ravelry as CraftyLilSecret].

Happy birthday Ben! Sorry your present is late, but something tells me you won’t hold it against me…..